WINSTON-SALEM, N.C. — In a way, the name “Quality Oil” is a misnomer. Why? Because it’s a lot more than an oil company.

And it celebrates its 90th Anniversary next month as a Shell Oil distributor.

About a year after its founding, Quality Oil was bought by local businessmen Bert Bennett Sr. and his nephew, Joe Glenn Jr. But in the middle of the Great Depression, not many in Central North Carolina knew a lot about the Shell brand.

Bennett and Glenn knew they had to create some “buzz.” So they patented a service station design that would become an icon in Winston-Salem’s history.

They build eight shell-shaped stations across town. The only one still standing is at the intersection of Sprague and Peachtree streets on the city’s southeast side. It’s on the National Register of Historic Places.

“I don’t know about profitability, but the size was very limited,” said Company President Graham Bennett, the grandson of the building’s builder.

Because it was so small and mechanics had to service the cars outside, the little stations quickly became obsolete. So Quality Oil started building the more traditional service stations like the one in Lewisville where Graham started working when he was in the eighth grade.

“My father (Bert Bennett Jr., who co-led the company in the 1950s and 60s) taught me how to run out to the car, and that’s when we check the tires, the oil, washed the cars,” Bennett told me during a recent visit at company headquarters on Silas Creek Parkway. “We did everything back then.”

Quality Oil would grow to become one of the largest Shell Oil distributors in the United States.

“We got into (the hotel business) by default,” Graham said.

In the mid-1970s, Quality Oil was working with a businessman who was helping it find service station properties primarily along interstate highways.

Today, that hotel goes by the name “Hotel NC” and has a different owner. But in 1975 during the oil shortages, it helped Quality Oil diversify from gasoline and set the framework for the multi-faceted company you see today.

But oil is still the core business. And with so many car manufacturers starting to build electric cars, Bennett and his company are forced to look ahead.

“I think anybody who would say in the oil business that they’re not worried about fossil fuels would be shortsighted,” he said.

It’s why all new Quality Oil stations are “piped” or fitted for charging stations to make the installation of those stations quick and easy if and when the time comes.

Even so, these aren’t bad times to be in the oil business. Gas prices have held steady in recent months. (Can you remember the last time you paid more than $3 a gallon?) Supply isn’t as much of an issue since the United States has become more self-sufficient, not depending as much on oil from the Middle East.

But Bennett says volatility in the business is a given that’s been around almost since the company was founded nine decades ago.

He feels the keys to survival will include diversification and adhering to his father’s work ethic: “Respect for folks (the customers and employees) and walking in their shoes. It’s the backbone of any company.” 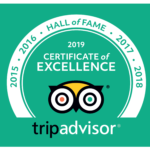