Out of all of the properties, Hilton Garden Inn Asheville Downtown won first place for the second year for their food raising and display efforts. In addition to helping out the community, the winning hotel also receives 30 tickets to the Southern Conference Men’s Championship Game where they are honored at center court with a trophy.

Hotel team members are excited about the impact they are able to leave in the Western North Carolina Community through these efforts.

“With the help of our team members, we are happy that children will be going home with food this spring break. We were able to contribute 3,239 items this year and our hearts are truly overflowing with joy,” said Chelsea Lewis, General Manager at the hotel.

The fundraising efforts were a slam dunk which they hope to continue for years to come.

About the Hoops Against Hunger Hotel Challenge: In its third consecutive year, Hoops Against Hunger Hotel Challenge, donates food to students during spring break while school is dismissed. Last year, the initiative was able to raise over a ton of food. To learn more about this cause, please visit https://www.eblencharities.org/hoops-against-hunger.php . 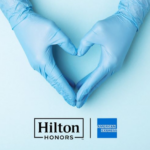